Cryogenic Pressure Control - Equilibar Back Pressure Regulators
Equilibar® back pressure regulators (BPRs) and valves are an excellent pressure control solution for very low temperature and cryogenic applications. Cryogenics deals with the use and study of materials at very low temperatures, typically meaning below -150°C. At these cryogenic temperatures, common gases such as Nitrogen and Helium change phase from gas to liquid. Liquid nitrogen and liquid helium can be used to keep other material frozen such as food, tissue samples and electronics. Temperature and pressure of these liquids play an important role in how they can be used successfully.

Due to its simple design, the Equilibar BPR can be easily configured with diaphragm and O-rings made with materials appropriate for low temperature use, such as PTFE.

In 2011, a researcher at The Harvard-Smithsonian Center for Astrophysics was looking for ways to reduce the cryogenic temperature variations in his radio telescope equipment. Astronomical detectors are contained in a cryostat, a device to maintain cryogenic temperatures, to improve performance and efficiency. Temperature deviations in the cryostat lead to decreased sensitivity during detection of astronomical objects.

The traditional method for cryostat temperature control is to circulate helium at about 350 psig and 4 Kelvin from a cryocooler. In this situation, an Equilibar BPR was installed in parallel to allow a portion of the helium to bypass the cryostat and return directly to the compressor. This resulted in more precise pressure control, reducing temperature variability.

The Harvard researcher, Michael J. Smith, published his findings with Equilibar President, Jeff Jennings, in the Proceedings of the ASME 2011 International Mechanical Engineering Congress & Exposition of November 11-17 in Denver, Colorado. The presentation details how the Equilibar BPR was successfully used to stabilize cryogenic temperatures in an astrological sensor by controlling Helium gas pressure in the range of 4 degrees Kelvin. An increase in temperature stability of 66% was reported by the study, which was conducted at the Harvard-Smithsonian Center for AstroPhysics.

A summary of the findings was also spotlighted in Cold Facts Magazine, Winter 2012 edition.

Equilibar back pressure regulators have been used in many other cryogenic and very low temperature applications. For more information, please contact an Equilibar application engineer to discuss your specific process. 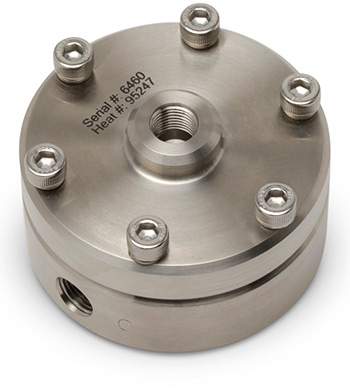