In the fine chemicals industry, hydrogenation is commonly performed in a fixed-bed catalytic reactor. An unsaturated hydrocarbon, such as an alkene or alkyne, is reduced in the presence of hydrogen to form a saturated (or more saturated) hydrocarbon.

In the schematic shown above, unsaturated hydrocarbon is injected into a reactor via a liquid control valve and hydrogen gas is injected into the reactor using a Mass Flow Controller (MFC). A fixed bed heterogeneous catalysis reactor accelerates the hydrogenation process. The Equilibar back pressure regulator accurately controls the reactor pressure to the setpoint set by the pilot pressure regulator in a 1:1 ratio. 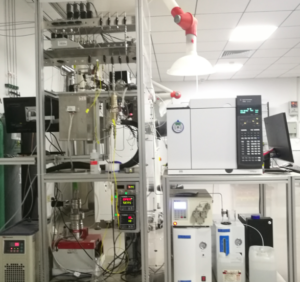 An Equilibar LF1 BPR in research of direct synthesis of hydrogen peroxide through O2 hydrogenation. Read about the case study.

In the oil and gas industry, removing impurities from petroleum fuels leads to cleaner emissions and improved downstream processing. Hydrodesulfurization (HDS) and hydrodenitrogenation (HDN) are chemical processes that use catalysts to remove sulfur and nitrogen impurities. New EU legislation such as IMO 2020 for marine fuels and Tier 3 for automotive fuels requires substantial reductions of sulfur and nitrogen to reduce their environmental impact.

Hydroprocessing, as it is sometimes referred to, is a similar process to the one in the schematic above where hydrogen gas and refined petroleum products are metered separately into a catalytic reactor bed for processing at a specific temperature and pressure. In most cases, the process would be controlled using an electronic pilot regulator. See schematic at right.

Equilibar’s technology is uniquely well suited for applications involving two-phase flow because it uses a direct sealing diaphragm over multiple orifices to control the pressure drop. A Berlin customer describes these benefits of using an Equilibar BPR to control reactor pressure in hydrocracking catalysis test system:

Contact our engineers to determine which Equilibar back pressure regulator is best suited for your demanding hydrogenation reactor control application. We have many options and years of experience with complex process conditions. 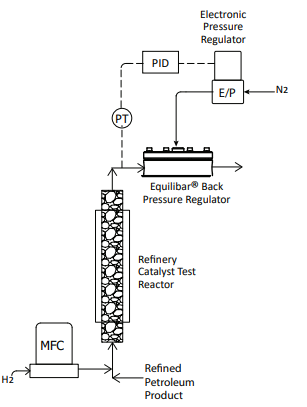 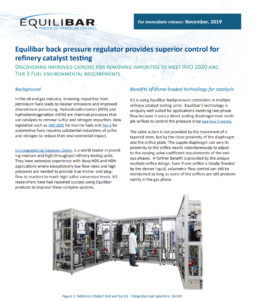