Supercritical Extraction and Fractional Separation -
Supercritical Carbon Dioxide (sCO2) has been proven to be an effective solvent and liquid extraction medium with the added benefit of having environmentally friendly attributes. Carbon Dioxide is abundant, reusable and non-toxic, and it reaches a supercritical point at an easily controlled temperature and pressure. Once at the supercritical point, the solvating properties can be tweaked with relatively small changes in temperature and pressure. The ability of sCO2 to change solvent power with small pressure and temperature changes leads to its effective use in fractionation. Fractionation or Fractional Separation is a separation process in which a mixture (gas, solid, liquid) is divided into components during a phase transition. 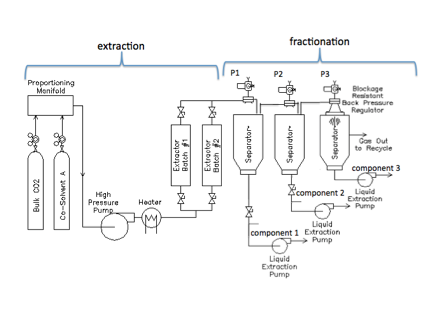 In the case of extracting essential oils from plants, researchers have found that in some plants there are unique healing or medicinal properties in different oils within one plant. In order to extract each of the oils in a plant, fractionation is used. The substances to be extracted have different dissolution conditions in sCO2, so tweaking the process pressure following supercritical extraction allows each substance to separate independently, resulting in selective extraction of components. This process can also be used to extract beneficial oils from fish or aromatics for perfumes.

The initial extraction process is the same as that described in the article, Pressure Control in Supercritical Extraction. SCO2, sometimes along with a co-solvent such as ethanol, is pumped through a heater to reach the pressure and temperature conditions required for solvency of the plant oils which are located in the batch extractor. Supercritical extraction takes place as the sCO2 moves through the plant matter in the batch extractor. In the process of fractionation, after exiting the batch extractor, the mixture goes through a series of separator vessels in a multistage operation allowing selective and sequential fluid extraction. Each of the separators is set at a very specific pressure, allowing only one component of the mixture to drop out.

A representation of the fractional separation process is shown in the schematic above. In order for each of the extracted components to be most pure, a precise pressure must be maintained in the separators during fractionation. The unique capability of the Equilibar back pressure regulator to maintain precise pressure control makes it ideal for this targeted fractional separation process. In the final stage of the separation, where the sCO2 is decompressed for recycling, the Equilibar blockage resistant regulator would be required. The expansion of the supercritical fluid during this pressure let down stage is often problematic. The Joules-Thompson effect causes a dramatic temperature drop which can lead to ice formation that may block the internal passages of the BPR.

The new Blockage Resistant back pressure regulator from Equilibar uses a patent pending technology to resist the build up of ice in its internal passages. The design also resists blockage from oils that have become highly viscous due to the extreme cold of the expanding gasses. After the pressure let down step the targeted oils are separated and the CO2 and co-solvents may be removed for recycling. An in depth description of the benefits of the Blockage Resistant regulator is found in the Pressure Control in Supercritical Extraction article. 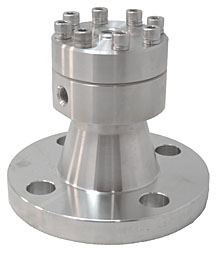