Over the years, Equilibar’s technical team has worked with clients to envision new applications and expand into industries I never could have imagined when I first started the company. These new engineering ventures include single use valves for the pharmaceutical industry, massive custom regulators for the defense industry, and cryogenic valves for supercritical CO2 extraction.

To keep up with these ideas and requests, we have steadily added to our engineering department, and I’m happy to introduce our two newest design engineers:

Carlyle Donevant earned a master’s degree in biomedical engineering from the University of South Carolina. Before joining us this summer, he worked for Nephron Pharmaceuticals in Columbia, SC, where he did hands-on work for a large-scale pharmaceutical production. “I was involved in a continuous manufacturing process that formed, filled and sealed sterile vials,” Carlyle said. “I got a lot of experience in a short time as the company grew from 350 to just under 2000 employees in three years.” 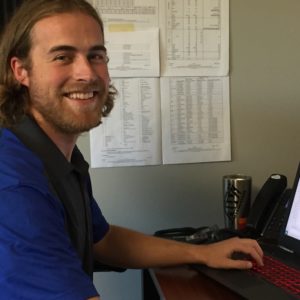 Zac Cobb earned a degree in mechanical engineering from the University of Tennessee at Knoxville. It was during college that Zac began working with a blacksmith and learned the crafts of welding and fabricating metal. He eventually began making sculptural jewelry and other metal artwork and moved to Asheville to work as a professional artist. He later worked as a machinist for Industry Nine, a company that designs and manufactures custom cycling components for serious mountain bikers around the world. Zac says he is especially interested in fuel cell technology and alternative energy.

In his free time, Zac hikes and mountain bikes in Pisgah National Forest. He also enjoys exploring Asheville’s food scene and he continues to create jewelry and sculpture. I feel lucky to work with some of the most on-point people in the fluid control industry, and we all feel lucky to have Carlyle and Zac on our team. If you would like to get in touch with them or any of our engineers, email inquiry@equilibar.com . You may also contact me personally at jeffjennings@equilibar.com . We look forward to hearing from you.