I recently returned from the ACHEMA exhibition in Germany, and it’s hard to express how excited I feel about the fast pace of progress in hydrogen energy and the roles Equilibar is playing in this movement.

ACHEMA is arguably the world’s top trade show for the process industry, with more than 2000 exhibitors from 50 countries. The show is more than a century old and is well established as the place to go to learn about innovation occurring at the intersection of science and engineering.

I saw a lot of promising technology at ACHEMA, but nothing compared to the excitement around hydrogen energy. Like many technology shifts that have occurred in history, international circumstances are undoubtedly playing a role. As the war in Ukraine disrupts traditional sources of energy, the world has a new urgency to adopt renewables as quickly as possible. Concerns about climate change and pollution in general are also factors.

(For information specific to fluid control for hydrogen energy processes, please skip to next section.)

Hydrogen can be produced using a variety of resources, including natural gas and nuclear power. A greener way to produce hydrogen, however, is through renewables such as wind and solar.

In solar energy, for example, photovoltaic (PV) panels are used to absorb the sun’s radiation and convert it into electricity that can be used on site or integrated into an adjacent power grid. Since sunlight varies, however, people must have ways to store the energy and transport it to places where it is needed. One way is to use solar energy to power an electrolysis reaction to split water into its components of oxygen and hydrogen. The hydrogen can then be stored and transported like oil or gas. Once the hydrogen is in the desired setting, a fuel cell uses it to make electricity through a chemical reaction. Unlike a gas-fired or coal power plant or a traditional combustion engine, the fuel cell produces no greenhouse gasses, only water and electricity.

Many people find it helpful to think of electrolysis and fuel cells as inverse processes—in this case, electrolysis uses solar energy to make hydrogen while a fuel cell uses the hydrogen to make electricity.

The direct-sealing diaphragm valve technology found in Equilibar® devices offers unique fluid control for both of these steps in the Hydrogen Cycle.

Fuel cell testing was one of Equilibar’s first markets. Even before our official founding—when we were still a tiny basement start-up—researchers had found that the dome-loaded multiple orifice design of our back pressure regulator (BPR) was especially well suited for fuel cell testing needs. In particular, our BPR’s high sensitivity in low pressure ranges, its 1000:1 flow rate turn-down ratio, and its easy automation for computer control made it perfect to integrate into fuel cell testing systems. Since that time, our engineers have built a base of expertise around fuel cells, and they continue to do so today. Our Fuel Cell Pressure Regulator page is a good starting point.

The Hydrogen Energy Cycle is complex, but its multi-faceted quality means that it offers a great deal of potential for our future. I am personally energized to be working in the field. 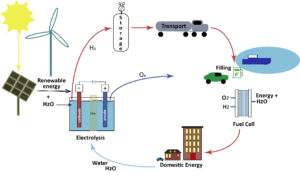 Several excellent sources of information are available from the US Department of Energy. One is a storehouse of information on Hydrogen, one provides the basics on Solar Energy and another explains more about how Fuel Cells work.

Equilibar also has several pages dedicated to electrolysis, fuel cells and more. I hope you will take a few minutes to explore our website for topics of interest. Our products will be featured in the Pressure Control Solutions Booth 12604 at the Hydrogen Technology Expo 19-20 October 2022, Messe Bremen, Germany. As always, I encourage you to get in touch with me or another of our experienced engineers. We look forward to hearing from you.