Equilibar is happy to introduce Jason Kelley, Assembly and Testing Technician, who joined the team in November of last year.

Jason previously worked as a mechanic for Carowinds, a large theme park near Charlotte, where he performed maintenance on roller coasters and other high-speed rides. Not surprisingly, an extreme attention to detail and safety protocols played a big role in his responsibilities. “The scope of work at a theme park is impressive,” he said. “When people think the park is closed, that’s when it was the busiest for us. Every bolt and every nut have to have a safety check performed.” 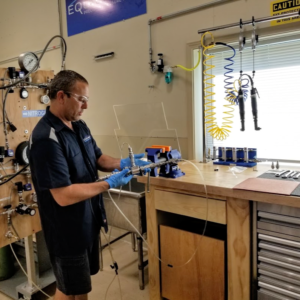 Like the rest of the Equilibar team, Jason is eager to take on a challenge. At Carowinds, he once volunteered to climb to the top of the flagpole on the 260-foot Sky Tower attraction to untangle the flag.

“I was also assigned to do cable and counterweight inspections on the Windseeker, the second tallest ride in the park,” Jason said. “I would ride to the top and climb all over the hub during our morning maintenance checklist. From there I would climb a ladder on the side to the very top, called the crow’s nest, and enter the ‘tube.’ From there I would climb down the inside of the tower, checking pulleys, cables, motors, and gearboxes as I descended.” 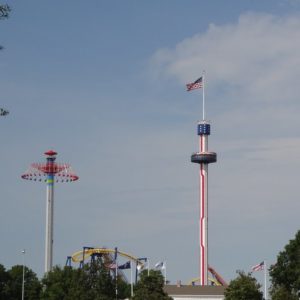 Looking toward the future, Jason is eager to learn the details about the most specialized variants of Equilibar regulators. He wants to cross train to be able to fill multiple production roles and provide leadership.