Celebrating with a Fellow WNC Manufacturer -

Just over a year ago, Bold Rock opened its North Carolina facility a few miles down the road from Equilibar in order to keep up with astonishing demand for its artisan hard cider.

As BrewBound News reported, “The operation on School House Road in Mills River, NC, is crafting cider from local apples picked at nearby orchards. In North Carolina apples are sourced from Hendersonville-based Apple Wedge Packers, a fifth-generation family-owned business that has been operating for over 150 years.” Bold Rock’s new ciderworks and tap room are on an old farmstead across the road from a school with roots going back to the 1700s. The setting is quite rural, and yet the cidery has already become a thriving night spot, manufacturer, and employer.

It also turned out to be the perfect venue for celebrating Equilibar’s hard work during 2016. As the party was kicking off, Bold Rock’s Kim Chappell treated Equilibar employees to a tour of the cider making and bottling lines. “We chose Mills River for two reasons,” she explained as she stood among towering stainless steel tanks. “The first was the apple crop here. The second was the plentiful supply of clean water.”

The fast-growing company has already had a huge impact on Henderson County, which had previously witnessed a steady decline in the number of operating apple orchards. While once there were multiple juicers in the area, today there are none.

Equilibar believes it is a great benefit to be able to partner with like-minded local companies. These are businesses that are invested in our community and have the agility and innovation to adapt to a fast-paced global marketplace. We were happy to get to know more about Bold Rock and we are always proud to join other environmentally and community conscious manufacturers in building a foundation for a bright future in our region and beyond. 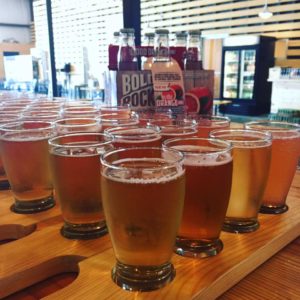